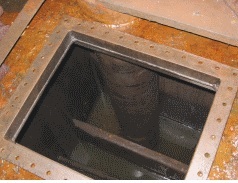 Two employees were required to work in a fuel tank which was accessed via a small manhole, shown here.

They had to use buckets to remove 600L of seawater and diesel before entering the tank. Because of the fumes, they took it in turns to enter the tank to clean it with rags before welding it. Once of them experienced breathing difficulties.
The harbourmaster visited the boat and then contacted the HSE who found:


HSE inspector David Cory said: “C & L Marine’s lack of preparation for this work showed very significant failings, which could have led to tragedy – they should have been well aware of the risks cleaning and then welding in the diesel fuel tank would have posed.  The tank should have been thoroughly steam-cleaned or jet-washed, instead of being bucketed out and mopped with rags. There was no test for the presence of noxious or flammable gases, or whether there was sufficient oxygen in the tank before the men began work. If the diesel fuel residues had been sufficiently heated they would have created fumes which could have led to an explosion, or fire. Ventilation was either absent, or woefully inadequate.”