Smurfit Cappa were fined£200,000 on 21st March 2013 following an accident on a press used to stamp the metal lids that fit on either end of whisky bottle tubes. The press can apply a force of up to 35 tonnes.
After changing part of the machinery, the operator was testing it to make sure it produced the correct lid size. As he reached under the pressing tool to remove a lid, the tool stamped down on his hands.

The HSEfound that the operator had not been trained on how to operate the machine safely and the company had not carried out a risk assessment. In addition, the people supervising him had not received suitable training. 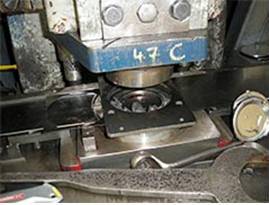 Inan earlier case, following an accident in 2009 at their Preston site, they were fined over £9000 (inc. costs) when an employee who was pushing waste onto a conveyor was forced onto it by a reversing van. Smurfit should have made sure pedestrians were kept away from moving vehicles by providing barriers or marked areas.
Commenting after the verdict on the reversing van case, Imran Siddiqui, the investigating inspector at HSE, said: "One of Smurfit's employees suffered broken ribs as a result of the company's failings. But if he had been hit harder by the vehicle, or forced into the machine which baled the cardboard, then his injuries may have been a lot more severe. And, Mr Siddiqui pointed to the fact that, each year, an average of 61 deaths and 60,000 injuries are caused by vehicles in workplaces.
Posted by Unknown at 12:38