Permtting Regulations and the operation of a waste compactor

There was a strange requirement in the Waste Management Licencing Regulations 1994. Regulation 18 covered registration in connection with exempt activities. 18(1) stated that "it shall be an offence to have an exempt activity involving the recovery or disposal of waste without being registered with the appropriate registation authority." The strange part is the combination of "exempt" and "registration".
I believe that whoever drafted these regulations realised that it was daft to require everybody who had a compactor for their own waste, or even a bin for their own waste which is subsequently compacted, to be registered for exemption; it would be a bureaucratic nightmare for no benefit.
Therefore, in the Permitting Regulations, this has been specifically revoked.
However, I don’t believe that the Environment Agency understand this yet and there are some who still believe it necessary.
If you want to see the whole rationale behind my opinion, go to this link. 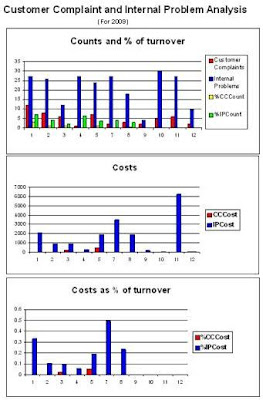 These show the graphical outputs from the customer complaints (CC) and internal problems (IP) function in INTACT.

INTACT has the ability to count not only the CCs and IPs, but to
These graphs show these outputs. There are 3 graphs because of the need to have 3 different Y axis scales.

The graphs were added in response to a customer request. They wanted to make more use of the recorded data.
Posted by Unknown at 10:29 No comments:

Supermarket giant Tesco has been fined £95,000 and ordered to pay over £24,000 in costs after pleading guilty to five breaches of the Regulatory Reform (Fire Safety) Order 2005 (RRO).

London Fire Brigade, prosecuting, said firefighters were called to a fire at Tesco’s Colney Hatch store in Barnet on 14 October 2007. When they arrived found the premises locked but managed to gain access after attracting the attention of an employee who was restocking shelves. There had been a fire in the staff kitchen but it had been put out by staff using extinguishers and a fire blanket. There was still a significant amount of smoke in the kitchen, the corridor and staff locker rooms and crews had to ask staff several times to evacuate the premises.

This incident made officers concerned about fire safety in the store, so on the following day they inspected the premises. A number of breaches of fire safety legislation were found, including a failure to review the store’s fire risk assessment, a failure to ensure escape routes were kept clear and inadequate fire separation due to doors being wedged open. An enforcement notice was subsequently served on 2 November 2007.

London Fire Commissioner Ron Dobson said: “Fire safety is a key part of good business management and the general public should feel safe from fire when they are out shopping. London Fire Brigade will continue to take action when businesses, large or small, do not take their fire safety responsibilities seriously. Failure to comply with the law can, as this case has shown, result in a prosecution.”

A Tesco spokesperson told Info4fire.com: "We take safety matters in all of our stores extremely seriously. We would like to reassure customers that this was an isolated incident and all issues at this store have been resolved."

The owner of a timber yard has been ordered to pay a total of £130,300 after pleading guilty to several breaches of fire safety legislation.

Paul Ashley, of P and S Ashley Timberworks, in Cheshire, was found guilty of eight offences against the Fire Safety Order at the Cheshire Crown Court on 11 May.

He was fined £80,000 and ordered to pay Cheshire Fire and Rescue service £50,300 in costs after repeatedly refusing to carry out fire safety measures.

Despite being visited on several occasions by fire safety officers, the first time in February 2008, Mr Ashley failed to provide a suitable fire alarm or proper means of escape. He also failed to implement a ‘suitable and sufficient’ risk assessment.

Mark Cashin, deputy chief fire officer, said: "This is an excellent result. Fire safety is a key part of good business management and Mr Ashley showed little or no regard for the safety of his employees or the people living and working around his premises."
Origin: Info4Fire
Find out more about Fire Safety Support from SSS

Supply of Machinery (Safety) Regulations- when they apply

There is some confusion over when the Supply of Machinery (Safety) Regulations 2008 apply. We've had one instance where the HSE have said that it applies when you are selling old machinery.
This isn't true.

(ii) with a view to distribution or use, whether by the person making it available or another; and

(iii) whether for reward or free of charge;

Note that it only applies if it is for the first time. But beware; first time means first time use within the EU, and if you buy even a second-hand piece of machinery, say from the USA, then the regulations apply.

Note also that (ii) states distribution or use. So, even if it is for use within your own organisation, the regulations apply.

In reponse to customer inputs, we'ev started putting graphical analysis outputs to INTACT.
Posted by Unknown at 11:22 No comments: